For Christians, the earth is a creation that must be preserved. It was given to us as a place to live. The first pages of Genesis already state that the creation of the earth is "good". "God saw all that he had made, and it was very good. “ (Gen 1:31). God's creation is not a product of chance. It is deliberate and created out of love ("creatio ex amore").

Man is part of creation, not above it, but is part of the universe. In special respect for the whole environment - plants, animals, water, air and earth - man takes care of the continuity of life. Francis of Assisi pointed out this aspect in a special way: In the "Canticle of the Sun" the fellow creatures are called his brothers and sisters (including "Brother Sun" and "Sister Moon").

In 2010, the "Ecumenical Day of Creation" was solemnly appointed by the Association of Christian Churches in Germany (ACK) as part of the Second Ecumenical Church Day in Munich and since then has been celebrated throughout Germany on the first Friday in September. The focus is on prayer for the preservation of creation, praise for the Creator and encouragement to take concrete steps.

In his encyclical Laudato Si Pope Francis writes: ‘We are faced not with two separate crises, one environmental and the other social, but rather one complex crisis which is both social and environmental’ (LS 139).

The words are very apt, because our earth and its inhabitants are threatened today more than ever: man-made climate change, deforestation of the rainforests, intensive animal husbandry and waste of energy are in stark contradiction to the (biblical) responsibility for creation. The finiteness of natural resources is noticeable. Global warming and greenhouse gas emissions are rising - with catastrophic consequences for people, societies, animals and the whole of creation. In light of these developments, the Christian churches have been committed to the preservation of creation for many years. In many places and through small but important steps, Christians stand up for the preservation of creation. On this page you will find some exemplary actions.

In September 2018, the Plenary Assembly of the German Bishops' Conference adopted recommendations for action on ecology and sustainable development for the German (arch) dioceses under the title "Responsibility for Creation as Church Mission". In it the German bishops call, among other things, for mobility to be sustainable and for the unavoidable CO2 emissions to be offset by the compensation offered by the Klima-Kollekte. In its text "Lent to us is the Star on which we live", the EKD also addresses the Agenda 2030 as a challenge for the churches and proposes to the member churches, among other things, the reduction of their CO2 emissions. Numerous regional churches and institutions offset the emissions resulting from (foreign) business trips or mobility via Klima-Kollekte.

The committed people from the regional churches and (arch) dioceses form a network. 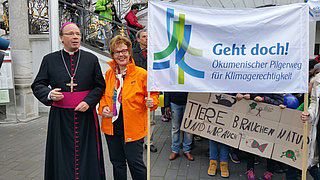 Climate protection for the church - certified

Are you active in a congregation or in another church organization? Would you like to find out more about how you can introduce an environmental management system?

Systematically tackle and improve your own environmental impacts: With the church environmental management system "Grüner Hahn" or in southern Germany "Grüner Gockel", parishes and church institutions can successfully protect the environment and climate and reduce operating costs. The system is adapted to the needs of the church and allows each church to set its own priorities and goals. The motivating, participation-oriented cooperation enlivens the parish or institution. The criteria are based on those of the European Eco-Management and Audit Scheme EMAS.

“The "Grüne Hahn" strengthens the credibility of the church both internally and externally:

Those who demand the protection of the environment and climate from others and at the same time treat God's creation with little care in their own area lose credibility in the long run. Environmental management is a systematic path from an idea to concrete action.

In environmental management, everyone is invited to participate. Projects are planned and implemented in teamwork. In this way, the community life of the congregation is promoted.

The "Grüne Hahn" is economically important and ecologically significant:

Saving energy not only protects the climate but also makes financial sense. For NRW alone, the EnergieAgentur.NRW estimates a church savings potential of around 150,000 tonnes of carbon dioxide or 40 million euros in energy costs per year."