The consequences of human-caused climate change are already visible today and will increase in the decades to come. In the 20th century, sea level rose about 17 centimeters on global average. The reason is the sea expansion due to rising water temperatures as well as to melting glaciers, ice caps and shields. Moreover, scientists observe more intensive and longer droughts on the one hand and more frequent heavy rains and tropical whirlwinds on the other.

Until 2100: global warming increases
Until 2100, another rise of global temperature by 1.1°C to 6.4°C towards the time period of 1980 to 1999 is awaited. The warming will not be evenly spread but be especially distinct over land. And great regional differences are also awaited. How high the warming will be depends on how much greenhouse gases will be emitted until mid-century. As a consequence of climate change, drastic damages threaten especially if the rise of temperature breaks the limit of 2°C max towards the pre-industrial level. Extreme natural phenomena like heat waves and heavy rains will most probably increase in frequency and intensity, sea ice and glaciers will keep on melting. If the sea level keeps on rising, it can lead to flooding of coast regions and lower situated island states.

Effects on mankind and nature
The ecological, economic and social effects on mankind can develop dramatically because water shortage and hunger, health issues due to heat stress, malnutrition, diarrhea and other infectious diseases will increase. The loss of biodiversity up to the dieback of entire marshlands is also awaited. In interaction with damages by flooding and storms, eco-systems as well as human society could be greatly overtaxed. Scientists also fear that already relatively small changes in the climate system could lead to a so-called break-over point. When reaching such critical thresholds the climate can afterwards change immensely and possibly abruptly and so extremely challenge the ecological and human adaptability. 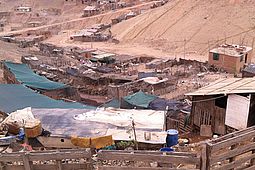 People in poor countries of the South will in any case be especially affected and they are already. Small island states and the big deltas in Asia and Africa are not only threatened with significant consequences. The adaptability capacity of people there is lower because they depend more on resources like the local supply with water and food. Those react especially sensitive on climate changes. While mainly the population in industrial countries has triggered the human-caused climate change, especially the population in developing countries will suffer from it. See Global Climate Risk Index 2015 GermanWatch 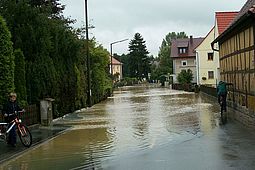 But the climate change will also be clearly perceütible in industrial countries. Mid- and Eastern Europe will have to adapt to water shortage, decreasing forest growth and increasing moor burnings and rising health risks due to heat waves. Southern Europe is hit more severely where amongst other things more wildfires and smaller crops are to be awaited. Up to 120 million people more could be threatened there by hunger. The German Environmental Agency has gathered findings about the consequences awaited even today for Germany and the adaption measures needed in a publication available here as PDF file (in German).