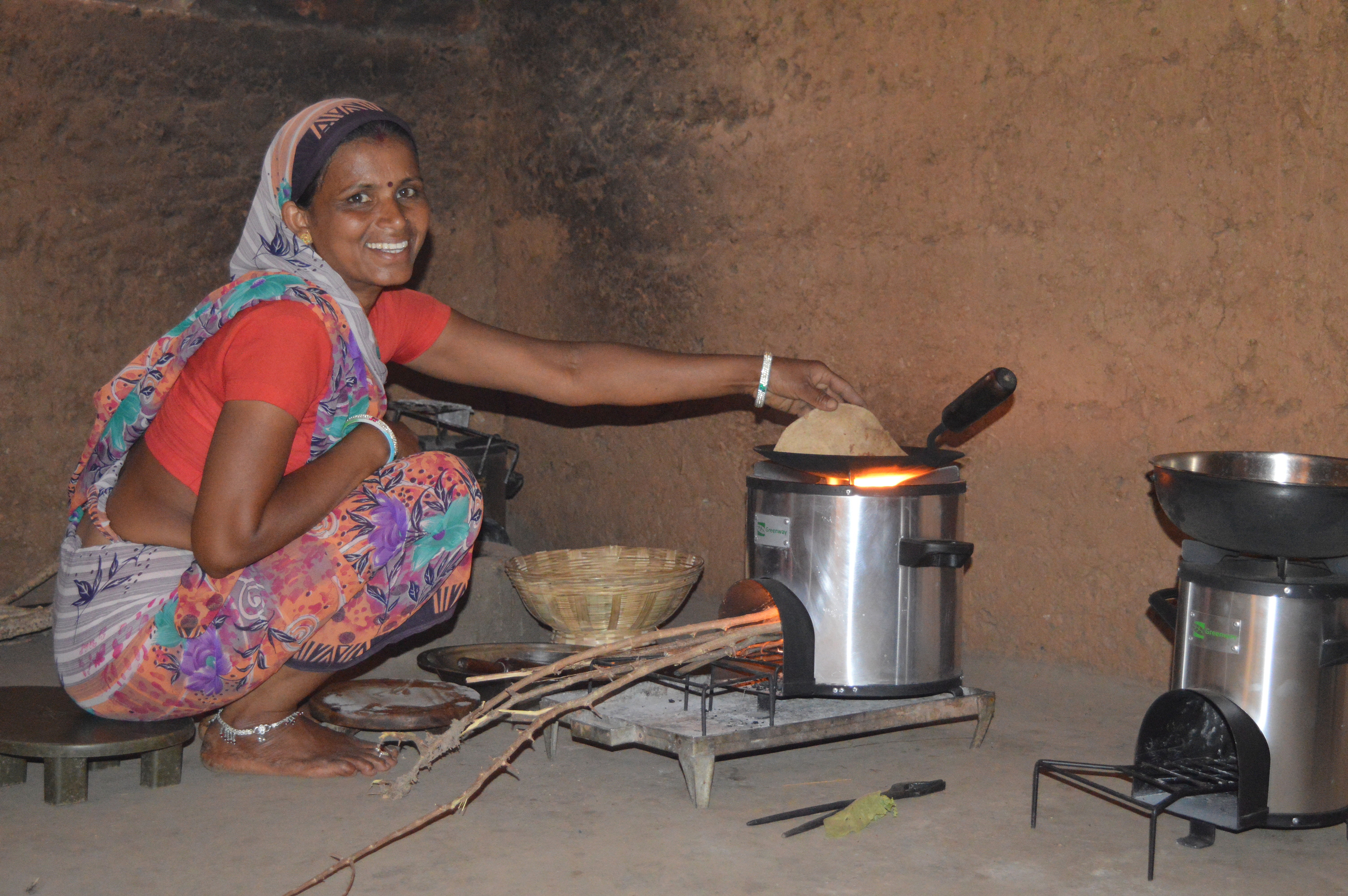 In the drought-prone region of Udaipur in the state of Rajasthan families are receiving improved, energy-efficient stoves. In 18,500 households traditional three-stone stoves as well as mud- and clay-stoves have been replaced with energy-efficient stoves. The climate protection project aims not only to reduce emissions but also to promote the socio-economic development of the region.

Situation of the families in Udaipur

Ninety-five % of the families in Udaipur District cook on traditional stoves. A family uses 3,200 kg of wood per year on average, as the traditional stoves lose a lot of energy without using it. Families often have to buy firewood as wood is scarce and the nearby forests already been cleared. If there is not enough income for firewood, women have to walk up to five hours to collect wood. When cooking on the traditional stoves families are exposed to enormous amounts of smoke, which affects the respiratory tract and irritates the eyes.

Improved stoves for women and the environment

Lakshmi and her family of seven were one of the first families to test the new, energy-efficient stove. The time saved is the biggest advantage for them. She explains that cooking for the whole family twice a day on the traditional stoves took about 1.5 hours per meal. With the new, energy-efficient stoves Lakshima needs less than an hour. The family spends the newly gained free time together in their fields to improve their income. But Lakshima also likes the flexibility of using the stove everywhere and the reduced amount of firewood needed.

Women report less soot on the pots, a decrease in eye irritation and a reduction in their breathing difficulties. They no longer have to laboriously collect or buy firewood, benefit from the timesaving and have more money in the household budget.

In total, the climate protection project will save 429,000 tons of CO2. On average, a family needs 67.5% less wood due to the new stoves and women save about 500 hours of time each year, which they would need to collect wood.

Creation of jobs in the rural region

Women do the Monitoring and earn some additional money. They check the stoves monthly and conduct surveys about their use. Regular maintenance ensures an optimal use of the stoves. In addition to innovative technologies, this also creates jobs in the district and improves the economic situation of the families. The project has created 150 jobs in the rural communities in total, 134 of them for women.

In the Gold Standard Registry, you can transparently view the retired certificates and get an overview of the climate and development impacts of the certified project: https://registry.goldstandard.org/projects/details/16

UUIPC is a social enterprise that was foundes by the Indian NGO Sevar Mandir. The objective of UUIPC is to support rural households through innovative, climate friendly techniques and therefore better their living standards. The usage of energyefficent cook-stoves shows one way besides others to fullfill this objective based on an environmental friendly method. Especially women benefit from UUIPC's efforts since their skilss are strenghtened and enhanced through capacity building. Further information is available online http://udaipururja.in/