renewable energy through biogas in India

Situation in the south Indian region of Anantapur

The district of Anantapur in southern India has little forest area and is considered very vulnerable to drought. Advancing deforestation is contributing to a further increase in drought. Since 98 % of the rural population, cooks on clay stoves fired by wood deforestation can hardly be counteracted. Women often spend many hours collecting firewood. The distances are long and the wood is heavy. The heavy load does not only endanger the Health of women. Firewood produces harmful smoke while cooking with, which poses further health risks such as respiratory diseases. Almost 90% of the biomass used per family and year for cooking and heating water in the district is non-renewable. The country's natural resources are almost exhausted.

Advantages of biogas plants for women and children

Since the poor population in particular is suffering from the country's dwindling wood resources, the Social Education and Development Society (SEDS), project partner of Bread for the World, implemented a biogas project in 121 villages of Anantapur District. The use of biogas instead of traditional clay stoves helps to reduce deforestation and protect natural resources. Families are no longer dependent on the dwindling firewood. Women and children no longer have to spend time and effort collecting firewood. Since biogas generates three times as much heat as firewood, preparing food is faster. This gives women more opportunities to cultivate their fields and educate their children. Since there are no more open fireplaces in the households the air quality in the houses improves which is particularly beneficial to the health of women.

Climate protection through biogas for the rural population

Five-thousand biogas plants were built for households with livestock. The approximately 2m³ plants are manufactured on site from local material and filled with organic waste products such as cow dung. Biogas is produced through fermentation processes of waste products within the biogas plant. Light gas rises to the top of the gas chamber, is stored and when called up from there it is transported to the families in the kitchen. The Household use the resulting biogas for cooking and for heating water. The construction of the five-thousand biogas plants contributes to the sustainable development of the region and helps to reduce climate-damaging emissions.

Further plus points of the climate protection project: As a by-product of the biogas plants produce nutrient-rich fertilizer, which the families use to cultivate fields. In addition, the construction and maintenance of the plants creates jobs in rural areas which contribute to strengthening regional development. Overall, the climate protection project contributes to the social, ecological, economic and technological progress of the region.

In the Gold Standard Registry, you can transparently view the retired certificates and get an overview of the climate and development impacts of the certified project: https://registry.goldstandard.org/projects/details/1156 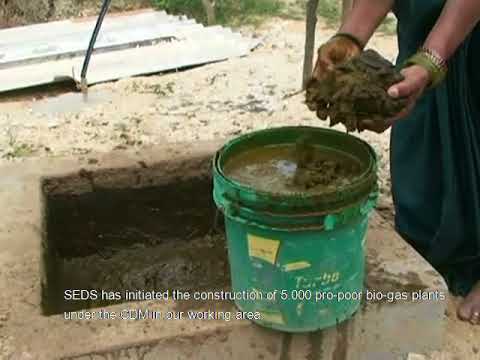 The Rural Environment and Development Society (REDS) is a  Non Profit Organization in the City of Penukonda  in the Andhra Pradesh State. The organization has been involved in initiatives that initiate social change and support  rural development in the region.