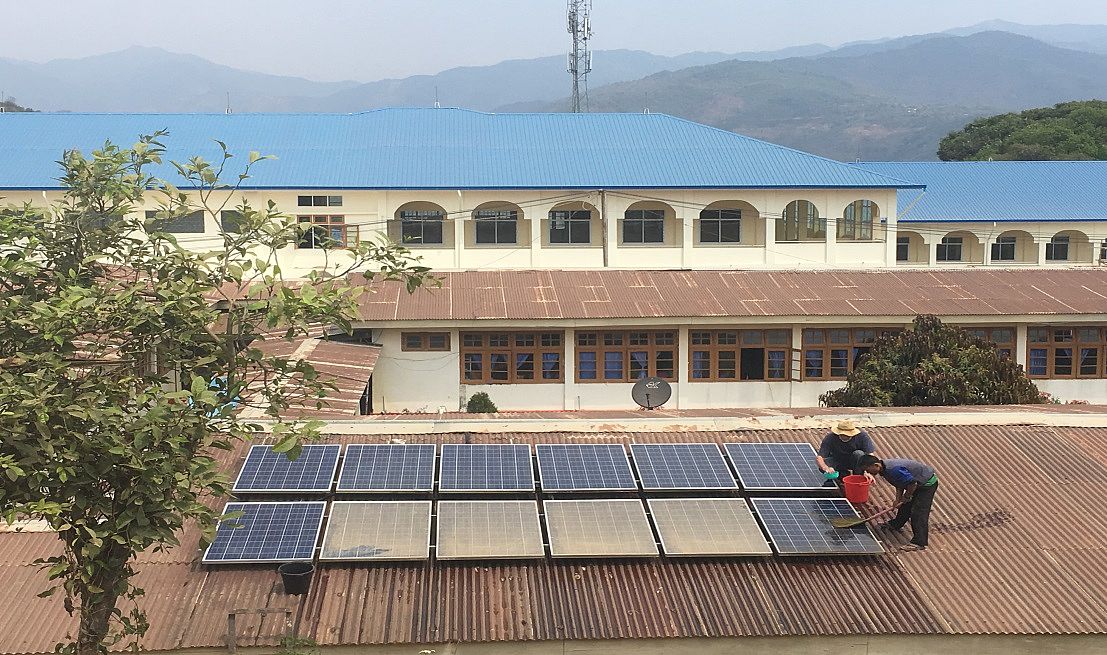 renewable energy with photovoltaics in Myanmar

The Chin-State of Myanmar is home to about half a million people. The energy supply of the state is generally poor leading to dependence on a single diesel generator. Although the state possesses a hydroelectric station, it is often out of service due to water shortage or heavy rainfall and flooding. The 12,000 inhabitants of Rezua Town as well as the hospital are dependent on the diesel generator which only supplies energy for two hours every day due to the high demand. Despite the small capacity of the hospital- 25 beds, several activities could not be performed with the limited energy supply. The usage of the diesel generator in the hospital led to emissions of 10t CO2 annually.

With the new solar panels, the hospital is supplied with more than the needed energy and can resume all its activities. During the day, direct energy from the sun is used while in the evening, the energy from the photovoltaic system stored in batteries is utilized. For this reason the hospital personnel has added to its list of equipment since they can all be adequately supplied by the facilty.

The hospital has reported an increase in activities such as the usage of sterilization equipment, all day surgical treatment and additional lighting in surgical halls. The personnnel have been trained on maintaining the facilityand can effectively save energy. The neighbouring households stand a chance of obtaining the skills on renewable energy and can also share the additional energy wit the hospital if they agree on it. Apart from climate action, the project has also impacted health and skills of the local population.

Our partner organization "Kirchlicher Verein Schöpfung bewahren konkret e.V." belongs to the evangelic-Lutheran State Church of Bavaria and supported the actualization of this project in Myanmar. The association has seen realization of similar projects in the past.  In this vein, the association organized a charity project for the installation of a wind park in Bavaria within he framework of environmental consulting for the evangelic-Lutheran church of Bavaria.